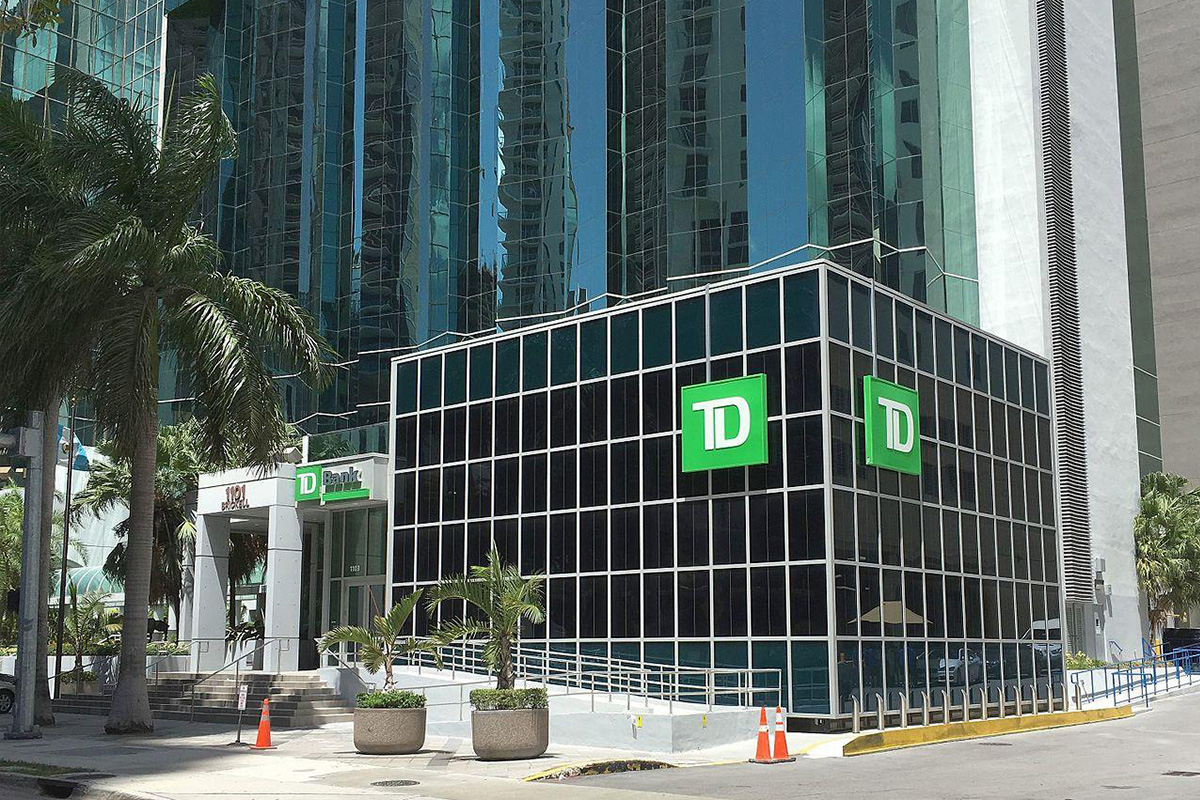 The maximum number of shares that may be repurchased for cancellation under the bid represents approximately 1.7% of the 1,812,651,730 common shares issued and outstanding as at November 30, 2019.  Under the rules of the TSX, TD is entitled to repurchase, during each trading day, up to 804,012 common shares (excluding purchases made pursuant to the block purchase exception), being 25% of the average daily trading volume of 3,216,047 common shares during the six calendar months prior to the commencement of the bid.

The number of shares and timing of the repurchases under this bid will be determined by TD. Prior to commencing purchases under the bid, TD intends to establish an automatic share purchase plan under which its broker, TD Securities, will repurchase TD shares pursuant to the normal course issuer bid within a defined set of criteria.

By their very nature, these forward-looking statements require the Bank to make assumptions and are subject to inherent risks and uncertainties, general and specific. Especially in light of the uncertainty related to the physical, financial, economic, political, and regulatory environments, such risks and uncertainties – many of which are beyond the Bank’s control and the effects of which can be difficult to predict – may cause actual results to differ materially from the expectations expressed in the forward-looking statements. Risk factors that could cause, individually or in the aggregate, such differences include: credit, market (including equity, commodity, foreign exchange, interest rate, and credit spreads), liquidity, operational (including technology and infrastructure), model, reputational, insurance, strategic, regulatory, legal, environmental, capital adequacy, and other risks. Examples of such risk factors include the general business and economic conditions in the regions in which the Bank operates; geopolitical risk; the ability of the Bank to execute on long-term strategies and shorter-term key strategic priorities, including the successful completion of acquisitions and dispositions, business retention plans, and strategic plans; the ability of the Bank to attract, develop, and retain key executives; disruptions in or attacks (including cyber-attacks) on the Bank’s information technology, internet, network access or other voice or data communications systems or services; fraud or other criminal activity to which the Bank is exposed; the failure of third parties to comply with their obligations to the Bank or its affiliates, including relating to the care and control of information; the impact of new and changes to, or application of, current laws and regulations, including without limitation tax laws, capital guidelines and liquidity regulatory guidance and the bank recapitalization “bail-in” regime; exposure related to significant litigation and regulatory matters; increased competition from incumbents and non-traditional competitors, including Fintech and big technology competitors; changes to the Bank’s credit ratings; changes in currency and interest rates (including the possibility of negative interest rates); increased funding costs and market volatility due to market illiquidity and competition for funding; Interbank Offered Rate (IBOR) transition risk; critical accounting estimates and changes to accounting standards, policies, and methods used by the Bank; existing and potential international debt crises; environmental and social risk; and the occurrence of natural and unnatural catastrophic events and claims resulting from such events. The Bank cautions that the preceding list is not exhaustive of all possible risk factors and other factors could also adversely affect the Bank’s results. For more detailed information, please refer to the “Risk Factors and Management” section of the 2019 MD&A, as may be updated in subsequently filed quarterly reports to shareholders and news releases (as applicable) related to any events or transactions discussed under the headings “Significant and Subsequent Events, and Pending Transactions” in the relevant MD&A, which applicable releases may be found on www.td.com. All such factors should be considered carefully, as well as other uncertainties and potential events, and the inherent uncertainty of forward-looking statements, when making decisions with respect to the Bank and the Bank cautions readers not to place undue reliance on the Bank’s forward-looking statements.

Material economic assumptions underlying the forward-looking statements contained in this document are set out in the 2019 MD&A under the headings “Economic Summary and Outlook”, for the Canadian Retail, U.S. Retail, and Wholesale Banking segments, “Business Outlook and Focus for 2020”, and for the Corporate segment, “Focus for 2020”, each as may be updated in subsequently filed quarterly reports to shareholders.

Any forward-looking statements contained in this document represent the views of management only as of the date hereof and are presented for the purpose of assisting the Bank’s shareholders and analysts in understanding the Bank’s financial position, objectives and priorities and anticipated financial performance as at and for the periods ended on the dates presented, and may not be appropriate for other purposes. The Bank does not undertake to update any forward-looking statements, whether written or oral, that may be made from time to time by or on its behalf, except as required under applicable securities legislation.

SAN DIEGO, Jan. 24, 2020 (GLOBE NEWSWIRE) — Global Payout Inc. (OTCPink:GOHE) (“Global” or the “Company”) and its wholly owned subsidiary MTrac Tech Corporation (“MTrac”) are pleased to announce that the beta phase of the system improvements to MTrac 2020 has been completed. The platform was augmented to accommodate the growing demands of the regulatory agencies that oversee the financial industry. The MTrac team plans to have all existing clients converted to the new system within 60 days and new clients to be boarded starting February 1st, 2020. MTrac is proud to maintain its front-runner position as a fully compliant, closed-loop payment service company.

The new platform will include a seamless wallet load feature with QR functionality for redemption. That is, a customer can come to a terminal, type in their phone number and quickly add funds to their wallet without having to go through a multi-step process. The user then gets a print out of a receipt that doubles as their redemption coupon for redeeming their wallet funds in exchange for product. With these updated compliance features, MTrac 2020 will allow more banks to join its network, which benefits MTrac clients by allowing them to use a wider variety of card types to load their wallet.

MTrac will continue to innovate and adapt its program to meet the demands of the market while assuring compliance with regulatory agencies and delivering a scalable solution to its clients.

Since the Company’s inception in 2009, Global Payout, Inc. has been a leading provider of comprehensive and customized prepaid payment solutions. From 2014 to 2017 Global focused on identifying new state of the art technologies in a variety of industry sectors and successfully helped launch MoneyTrac Technology Inc. and other companies within the FinTech space. In 2018, Global completed a reverse triangular merger with MoneyTrac Technology Inc. resulting in Global retaining the wholly owned subsidiary, MTrac Tech Corporation. Global’s current focus is continuing to identify new business opportunities while it reorganizes its future business endeavors.

MTrac Tech Corporation, a Nevada Corporation, is a privately held, wholly owned subsidiary of Global Payout, Inc. MTrac is a software technology, sales and marketing, and business development company focused on “high risk” and “high cost” industries. The Company’s flagship product is the MTrac payment platform offering a full-service solution with technology offerings including Payment Platform, Blockchain, Compliance, POS, E-Wallet, Mobile Application and Digital Payment Solutions. We are one network disrupting the status quo. It is MTrac’s creative vision through the use of its innovative technology solution to become the premier service provider offering the “Key to Cashless®﻿.”

New York, NY, Jan. 23, 2020 (GLOBE NEWSWIRE) — (via Blockchain Wire) Leading experts in the digital money sector will gather at the Crypto World Summit in New York on February 20, 2020 to discuss the latest developments in security token offerings and digital assets, amongst other rising blockchain and alternative financing topics.

The most current SEC laws, rules, regulations, and compliance will be addressed at this 4th International Conference and Workshop streamed live on Fintech World Media.

This premier event features speakers and attendees from a wide range of sectors, attracting a who’s who of the industry.  Other top discussions include: The Future of Bitcoin, The Digital Banking Industry, Blockchain and Real Estate, The ETF Cryptocurrency Market, DAO, Ethereum Investment, and Cannabis Banking Solutions.

Atlanta, Jan. 23, 2020 (GLOBE NEWSWIRE) — BitPay, the world’s largest provider of Bitcoin and cryptocurrency payment services, today announced a partnership with Simplex, the best-in-class processor of fiat-to-crypto transactions, that gives BitPay app users the ability to buy Bitcoin and other supported cryptocurrencies directly in app with a credit card. Users can now buy cryptocurrency, transfer funds, make purchases, buy gift cards and pay friends around the world all from a single app.

With the addition of Simplex’s credit card purchasing, BitPay aims to improve the overall user experience of the BitPay app. By eliminating the need to navigate a cryptocurrency exchange to fund payments, the company anticipates increased value to users, especially for new users unfamiliar with the space.

BitPay CEO and Co-Founder Stephen Pair said, “Cryptocurrency exchanges can be intimidating for new users. The Simplex integration, however, makes the blockchain payment experience seamless.” Pair added, “Whether converting fiat to crypto to make crypto payments, or converting crypto to fiat to pay with the BitPay card, the BitPay app is an all-in-one solution.”

“A real breakthrough in usability can only be achieved when the leading crypto payment app meets the leader in fiat infrastructure for crypto. We are proud to launch this partnership with BitPay and will work together to add more innovative solutions in the future,” added Nimrod Lehavi, Simplex founder and CEO.

Simplex, an EU licensed fintech company, is the industry choice for providing fraud-free cryptocurrency purchases via credit card. They list among their many clients industry leaders such as Binance, Bithumb, Xapo and Changelly. Their processing services eliminate fraud and ensure regulatory compliance, in part, by using AI technology to analyze each transaction with proprietary machine-learning algorithms. The Tel Aviv-based company was founded in 2014.

Founded in 2011, BitPay pioneered blockchain payment processing with the mission of transforming how businesses and people send, receive, and store money. Its business solutions eliminate transaction fraud, reduce the cost of payment processing, and enable borderless payments in cryptocurrency and fiat, among other services. BitPay offers consumers a complete digital asset management solution that includes the BitPay Wallet and BitPay Prepaid Visa® Card, enabling them to turn digital assets into dollars for spending at tens of thousands of businesses. The company has offices in North America, Europe, and South America and has raised more than $70 million in funding from leading investment firms including Founders Fund, Index Ventures, Virgin Group, and Aquiline Technology Growth. For more information visit bitpay.com.